You are here: Home » About Our Tea

1. How about tea history in China

The history of tea in China is long and complex. The Chinese have enjoyed tea for millennia. Scholars hailed the brew as a cure for a variety of ailments; the nobility considered the consumption of good tea as a mark of their status, and the common people simply enjoyed its flavor.

According to legend, tea was first discovered by the Chinese emperor and inventor Shennong in 2737 BCE. It is said that the emperor liked his drinking water boiled before he drank it so it would be clean, so that is what his servants did. One day, on a trip to a distant region, he and his army stopped to rest. A servant began boiling water for him to drink, and a dead leaf from the wild tea bush fell into the water. It turned a brownish color, but it was unnoticed and presented to the emperor anyway. The emperor drank it and found it very refreshing, and cha (tea) came into being.

The Erya, a Chinese dictionary dated to the 3rd century BCE, records that an infusion of some kind of leaf was used as early as the Zhou Dynasty (1046–256 BCE).

While historically the origin of tea as a medicinal herb useful for staying awake is unclear, China is considered to have the earliest records of tea drinking, with recorded tea use in its history dating back to the first millennium BCE. The Han Dynasty (206 BCE–220 CE) used tea as medicine. The use of tea as a beverage drunk for pleasure on social occasions dates from the Tang Dynasty(618–907 CE) or earlier. The Tang Dynasty writer Lu Yu's 陸羽 (729-804) Cha Jing 茶經 is an early work on the subject. (See also Tea Classics) According to Cha Jing writing, around CE 760, tea drinking was widespread. The book describes how tea plants were grown, the leaves processed, and tea prepared as a beverage. It also describes how tea was evaluated. The book also discusses where the best tea leaves were produced.

At this time in tea's history, the nature of the beverage and style of tea preparation were quite different from the way we experience tea today. Tea leaves were processed into compressed cakes form. The dried teacake, generally called brick tea was ground in a stone mortar. Hot water was added to the powdered teacake, or the powdered teacake was boiled in earthenware kettles then consumed as a hot beverage.

A form of compressed tea referred to as white tea was being produced as far back as the Tang Dynasty (618-907 CE). This special white tea of Tang was picked in early spring, when the tea bushes had abundant growths which resembled silver needles. These "first flushes" were used as the raw material to make the compressed tea. Tea is an important item in Chinese culture and is mentioned in the Seven necessities of (Chinese) daily life. Tea was also used as a relaxing therapy for the Chinese.

2. How to infuse Green tea 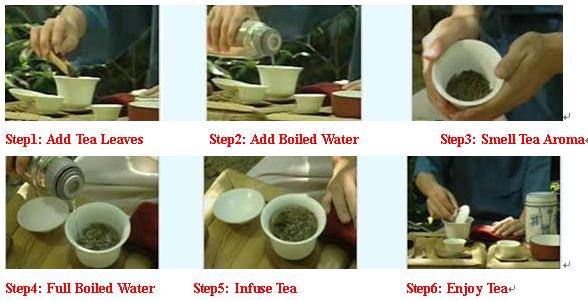 There are also 6 steps to infuse without-oxidization teas, such as green tea, white tea and flower tea.

3. How to make Gongfu tea 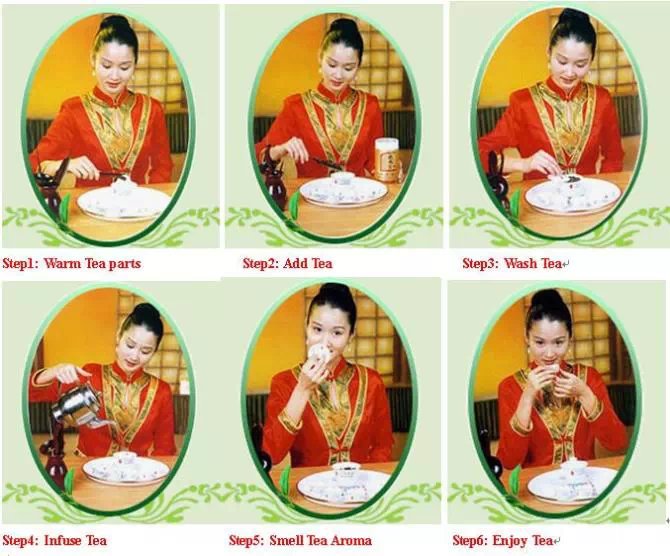 First is to warm the tea vessel, including Gaiwan or Purple clay teapot,  taste cups, smell cups;
Second to add tea in Gaiwan(chinaware covered bowl);
Third is to wash tea by 100centigrade boiled water,which can keep clean tea and do some preparation for
next step of complete infusion.
Forth is to completely infuse the tea by 100centigrade boiled water.
Fifth is to smell the frangrance of tea.Usually, we will smell the aroma from lid of Gaiwan for
Good frangrance collects on lid during infusion.
Sixth is to enjoy the tea soup with intoxication.

4. What is the benefits to drink Green tea

B. Anti-Cancer Benefits
A number of research studies have looked into the effect of green tea on cancer. Preliminary research indicates that green tea may prevent the spread of breast cancer if used during the disease's early stages. A different study showed that women diagnosed with ovarian cancer who drank green tea survived longer than those who did not. Studies focused on prostate cancer have shown that green tea prevents cancer cell growth. However, it was also found that green tea interferes with the function of chemotherapy. There have been conflicting results with regard to green tea's effect on colorectal, stomach, esophogeal, and lung cancers.

D.Other Health Benefits
Research studies indicate that green tea may help in the treatment of inflammation associated with ulcerative colitis and Crohn's disease. A different study indicates that green tea, which aids in the regulation of blood sugar, may help prevent type I diabetes. A third study indicates that the catechins in green tea may also help in the treatment of viral hepatitis. However, some rare liver complications have been connected to the consumption of high concentrations of green tea extract.

5.What benefits to drink Oolong tea


A.Improved Immune System
Oolong tea is high in antioxidants due to the polyphenols in the tea, which can boost the immune system and result in improved overall health. Oolong tea has more polyphenols than green or black tea and contains vitamins A, C and E. The high antioxidant properties of the tea may also provide some protection against cancer, especially cancers of the liver and lungs, as those areas are exposed to high levels of environmental toxins.

B.Weight Loss
Oolong tea is similar to green tea due to high levels of catechin polyphenols, which may increase the overall energy expenditure by the body and result in weight loss. According to TheColorOfTea.com, drinking three cups of oolong tea a day can result in weight loss in less than a month. Oolong tea drinkers may experience double the calorie burn of green tea drinkers, according to research by the University of Tokushima School of Medicine in Japan.

C.Reduced Signs of Aging
The high antioxidant properties of oolong tea may reduce the free radicals in the skin and help new cell growth, resulting in reduced signs of aging and smoother skin. According to LearnAboutTea.com, researchers from the University of California determined that individuals who drank oolong tea daily experienced a 50-percent reduction of free radicals within the skin in fifteen days.

D.Healthy Teeth
Drinking oolong tea may reduce plaque in the mouth, thereby inhibiting plaque and improving the overall condition of teeth and gums in the mouth compared to non-tea drinkers. Oolong tea may also freshen the breath

6.How to process Longjing tea

Authentic Xiu Lungching tea is processed by hand. There are about 6 procedures to make Lungching. 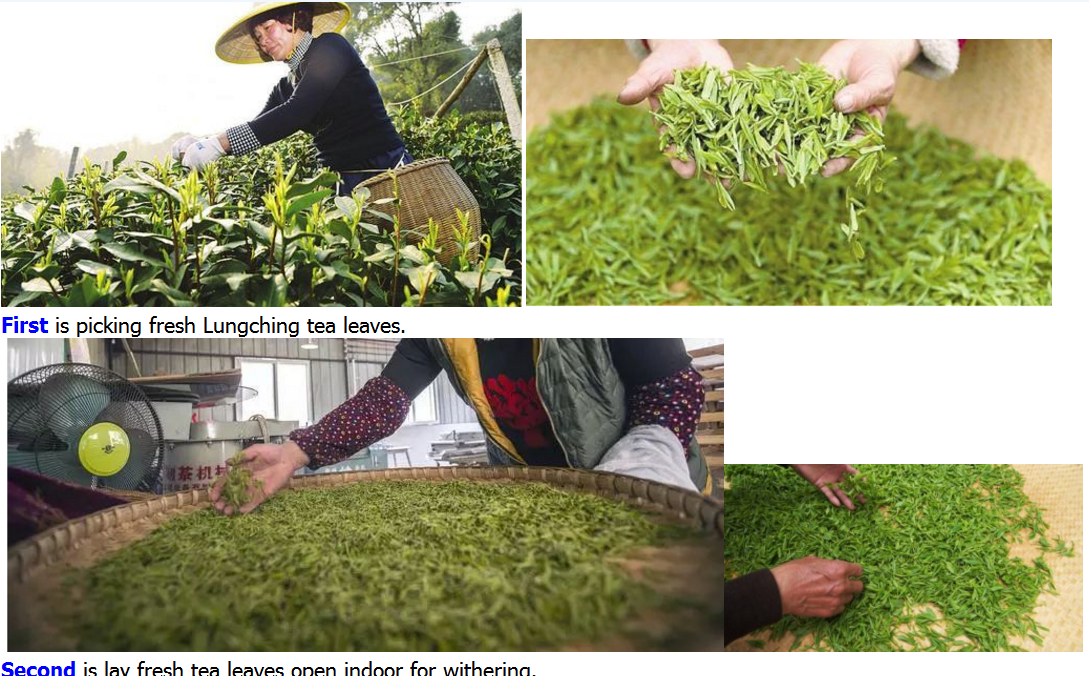 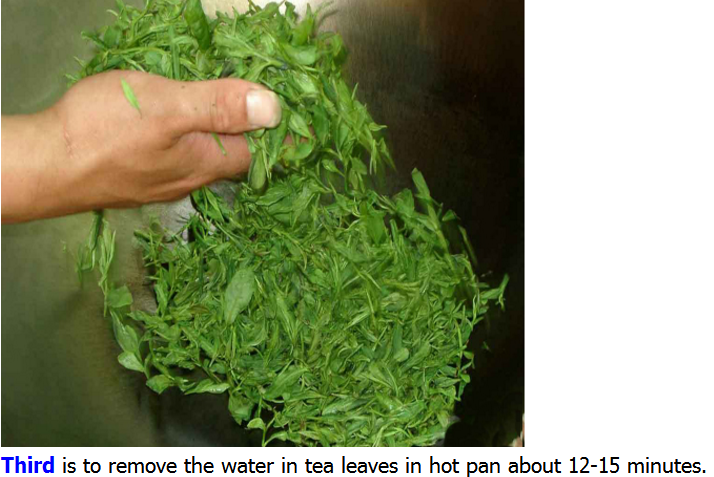 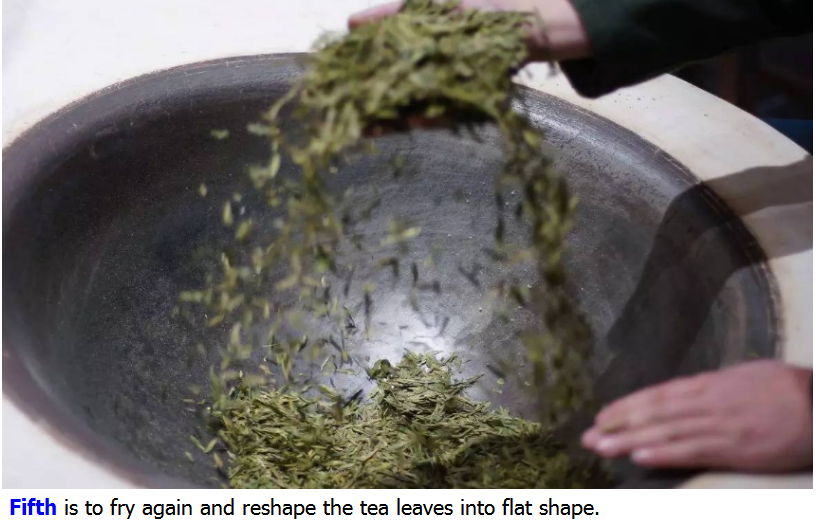 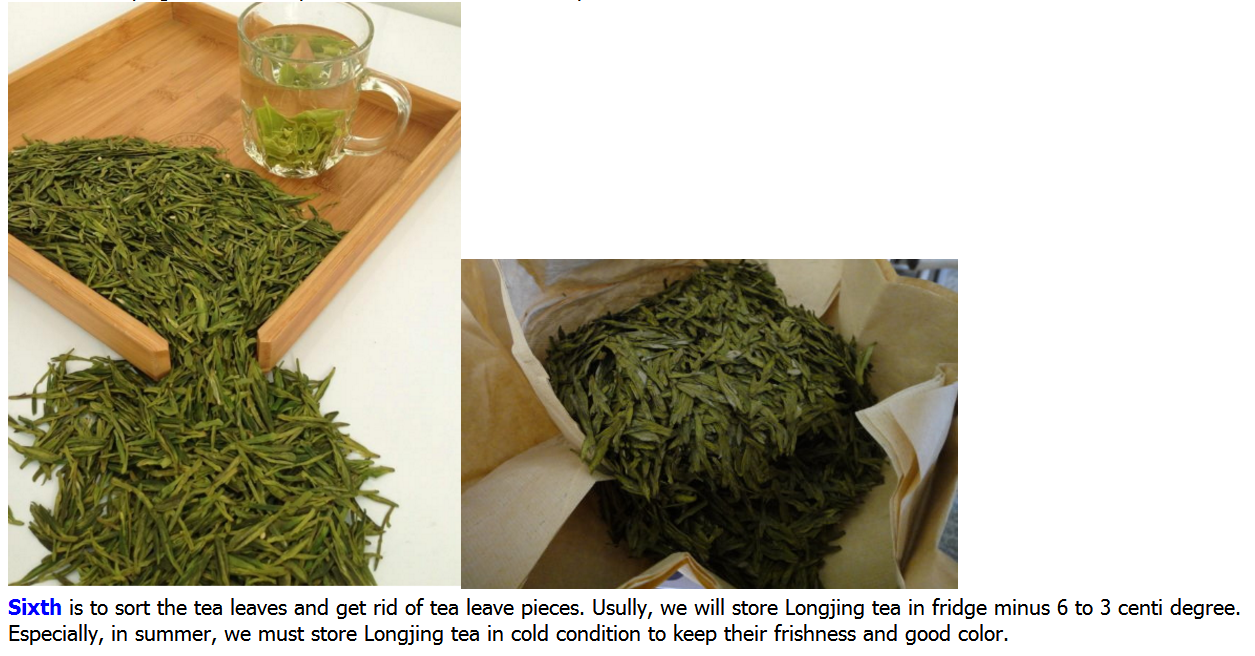 7. how to process Oolong tea

There are about 6 procedures to make Oolong tea.

First is picking fresh Oolong tea leaves by cutter.
Second is wither the fresh tea leaves by nature or by people.
Third is to make green in machine. In this procedure, machine will damage tea leaves’ cell and oxidize it.
Fourth is to remove the water and control the depth of oxdization.
Fifth is to roll the soft tea leaves into round shape.
Sixth is to dry the shaped tea leaves.